adminNovember 2, 2018 11:13 am 0
The Egypt star says he had a long-term plan to one day play for the Reds and he feels fulfilled living his life to the fullest. 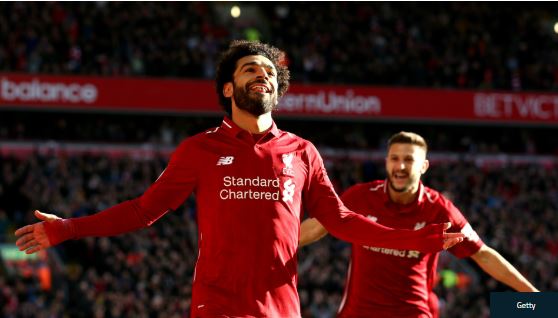 Mohamed Salah
Liverpool forward Mohamed Salah claims playing for the club has always been a dream of his.
Salah, 26, arrived at Anfield in the summer of 2017 and had an unforgettable first season with the club, becoming the record goalscorer in a 38-game Premier League season with 32 goals.
His good form guided Liverpool to the Champions League final, whilst he also sent Egypt through to their first World Cup since 1990 by scoring a late penalty against Congo.
In an interview with Liverpool’s official website, the popular forward has revealed that he often used to play as the Reds on video games as a youngster and always had a dream to play for the club one day.
“It’s a big, big, big club and everyone knows it. It’s famous all over the world – and with a lot of supporters in the Middle East, so I think I first heard of Liverpool when I was 10 or 11, something like that,” Salah said.
“The story of me playing as them on my PlayStation is true; sometimes it was as other teams, but most of the time I was Liverpool.
“Back then, I could never have imagined I’d be here one day, but it was always a dream of mine and you have to try and follow them.”
The former Roma man came close to joining the Reds from Basel in 2014, only for Chelsea to swoop in and secure his signature.
He left Stamford Bridge in search of regular playing time by joining Fiorentina on loan in 2015, before joining Serie A rivals Roma permanently 18 months later. His good form in Italy saw the Reds snap him up soon after
“It was when I went to Basel from Egypt, I had a plan in my mind that I would hopefully one day come to Liverpool,”he said.
“There was a chance before, but at the time it didn’t work for both sides.
“When there was interest again last year, I was very interested in coming to Liverpool straight away in my head, but you also have to see what the plan for you is and how you will fit into it. Here I am now!”
After a relatively slow start to the season by his standards in front of goal, Salah has netted four goals in his last three matches for Liverpool.
Jurgen Klopp’s side currently sit second in the Premier League table, level on points with leaders Manchester City, but behind on goal difference.
The Reds are set to take on Arsenal away from home in their latest Premier League tie on Saturday.