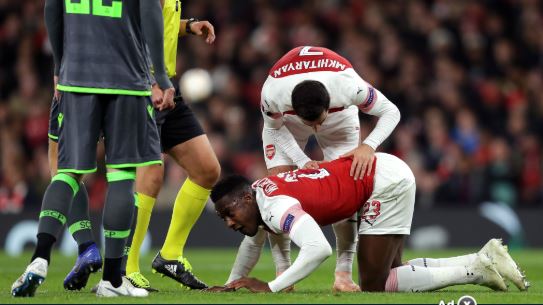 Danny Welbeck
Arsenal suffered an injury blow during their Europa League tie against Sporting on Thursday as Danny Welbeck was forced to leave the pitch on a stretcher.
Welbeck, who scored the winning goal in the reverse fixture in Portugal, was replaced by Pierre-Emerick Aubameyang in the 29th minute of the game.
The Arsenal forward was challenging Sporting full-back Bruno Gaspar for a header when their legs tangled and Welbeck landed awkwardly on his ankle.
Welbeck was quickly surrounded by his team-mates, with Matteo Guendouzi visibly shocked by the incident, before receiving oxygen and being carried from the pitch.
Following the match, which finished scoreless, Unai Emery confirmed that the forward had been sent to the hospital.
“The worst news tonight is these injuries,” the Spaniard told a media conference. “We think [they are] serious injuries.
“He has been taken to hospital. We are going to wait [for updates].
“Danny was working well. He is a very good person, his commitment to us is very big.
“This injury is very big for him, for us and for everyone.”
The Gunners’ tie was enough to send the team to the knockout stages of the competition, joining Premier League rivals Chelsea.
Next up for Arsenal is a match with Wolves this weekend before players head off for the international break.
Maurizio Sarri’s side claimed a narrow 1-0 victory in Belarus earlier in the evening, with Olivier Giroud scoring the only goal of the game.