Atletico Madrid kept up their pursuit of La Liga leaders FC Barcelona with an Alvaro Morata double in a 2-0 win at Real Sociedad on Sunday. 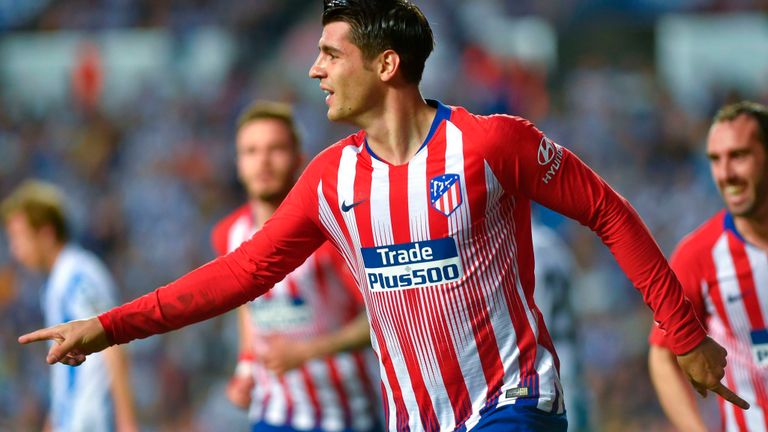 But it was done in grim fashion, as they had to play the final half hour of the match with 10 men after Koke was sent off.

Morata, who had scored his first goal for the club in last week’s 2-0 win over Villarreal, rose to head home from close range on the half-hour mark.

This was after a corner kick which had been flicked on by Atletico Madrid captain Diego Godin.

Morata, who signed for Atletico Madrid on loan from Chelsea in January after a poor spell in the English Premier League (EPL), used his aerial prowess again three minutes later.

It was to double his side’s advantage, glancing in a free kick from Koke.

Spain midfielder Koke earned his first yellow card late in the first half and clumsily picked up a second booking in the 62nd minute.

It means he is suspended from next week’s game at home to Leganes, as is Godin, who picked up a yellow card.

But Diego Simeone’s side coped admirably and rarely looked like letting their lead slip.

They held on to record an important victory after losing on three of their previous four trips to Anoeta.

Atletico Madrid is second in the La Liga standings on 53 points, moving five clear of third-placed Real Madrid and closing to within seven of leaders FC Barcelona.

FC Barcelona has 60 points after winning 1-0 at Real Madrid in Saturday’s “Clasico’’.

Simeone paid tribute to Morata for deciding the game, saying he had never doubted the striker’s ability.

“Whenever we sign a player we expect he will play at his best, although some take longer to adapt than others,” he told a news conference.

“But I’m even happier with how Morata has worked and adapted to the team than his goals.

“The top players always take less time to adapt. He’s not a boy anymore and he has the exact qualities we expected him to have.”

Morata himself added that Atletico Madrid would not give up their pursuit of Barca.

“We have to win every point we can and hope Barca slip up along the way. As long as there are points on the table, we’re going to keep fighting,” he said.

“It’s very difficult to win here. It’s a very tough stadium and a very tough opponent. So, these are three vital points for us.”