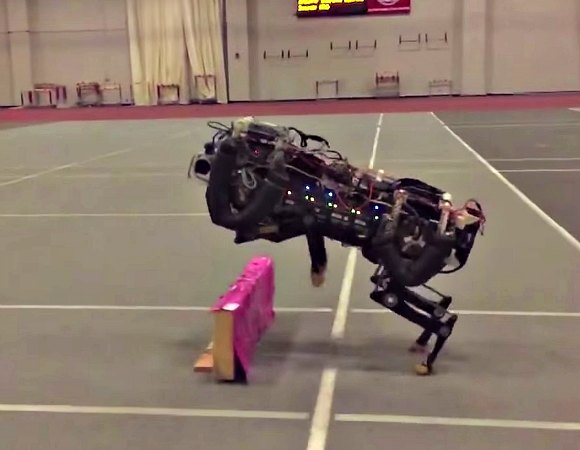 MIT researchers have trained their robotic cheetah to see and jump over hurdles as it runs — making this the first four-legged robot to run and jump over obstacles autonomously. Image Credit: Haewon Park, Patrick Wensing, and Sangbae Kim (www.mit.edu)

MIT researchers have trained their cheetah robot to jump over hurdles as it runs – making it the first four-legged robot that can run and jump over obstacles autonomously.

The Massachusetts Institute of Technology researchers had demonstrated last year that the robotic cheetah was able to run untethered. The feat was performed by the robot without the use of cameras or other vision systems. 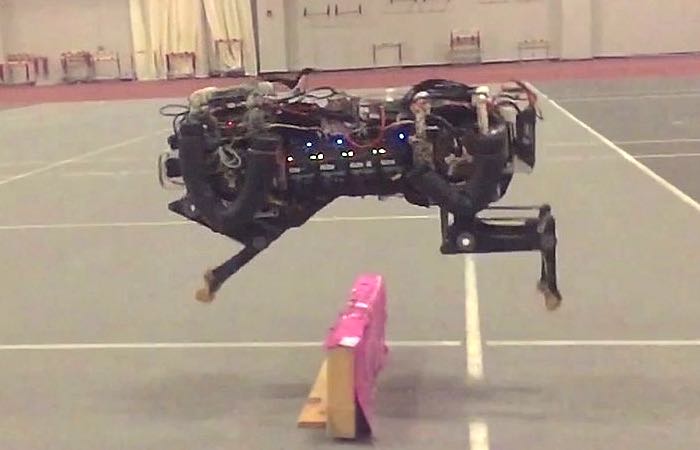 MIT leaping over a 25cm obstacle

Now, the robot can ‘see’, with the use of onboard LIDAR – a visual system that uses reflections from a laser to map terrain. The researchers developed a three-part algorithm to plan out the robot’s path, based on LIDAR data. Both the vision and path-planning system are onboard the robot, giving it complete autonomous control.

To get a running jump, the robot plans out its path, much like a human runner: As it detects an approaching obstacle, it estimates that object’s height and distance. The robot gauges the best position from which to jump, and adjusts its stride to land just short of the obstacle, before exerting enough force to push up and over. Based on the obstacle’s height, the robot then applies a certain amount of force to land safely, before resuming its initial pace.

In experiments on a treadmill and an indoor track, the cheetah robot successfully cleared obstacles up to 18 inches tall – more than half of the robot’s own height – while maintaining an average running speed of 8 km per hour.

The team tested the MIT cheetah’s jumping ability first on a treadmill, then on a track. On the treadmill, the robot ran tethered in place, as researchers placed obstacles of varying heights on the belt. As the treadmill itself was only about 4 metres long, the robot, running in the middle, only had 1 metre in which to detect the obstacle and plan out its jump. 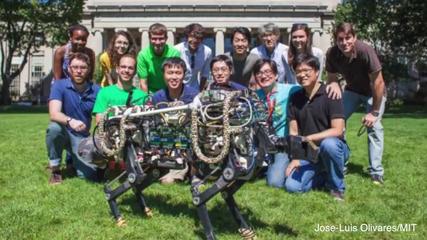 After multiple runs, the robot successfully cleared about 70% of the hurdles. In comparison, tests on an indoor track proved much easier, as the robot had more space and time in which to see, approach, and clear obstacles. In these runs, the robot successfully cleared about 90 % of obstacles. The team is now working on getting the MIT cheetah to jump over hurdles while running on softer terrain, like a grassy field.