Over 100 governments officials and industry executives are participating in the BT-hosted Commonwealth Cybersecurity Forum 2016 taking place this week in London.

Shola Taylor, Secretary-General of the Commonwealth Telecommunications Organisation (CTO), has announced that working with member countries on making cyberspace safer and resilient is a top priority for the London-based organisation over the next four years.

In his opening address at the annual Commonwealth Cybersecurity Forum 2016 taking place on 23 – 24 March in London, Mr Taylor made it clear that while “the open, decentralised nature of cyberspace has empowered individuals, fostered innovation and driven development, it also presents dangers for its users.

“Cyberspace can be used for criminal activities by targeting individuals through identity fraud, targeting the vulnerable through child exploitation, targeting communities through extremism and even targeting whole countries – the experiences of Estonia in 2007 being one example.

“This year’s event is our opportunity to understand new forms of cyberthreats and cybercrime and learn about new and effective ways to mitigate or eradicate them, particularly through international cooperation. With this in mind, I am pleased to announce here today that our Council has just approved our 2016 – 2020 strategic plan which makes cybersecurity one of our top priorities”, Mr Taylor announced. 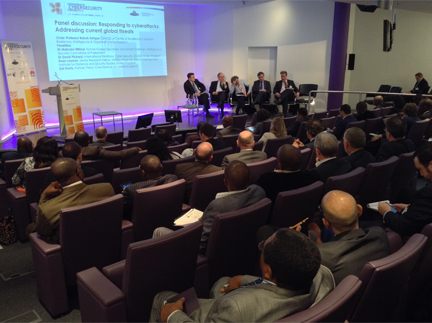 The Organisation, which convenes the annual event, is already working with a number of Commonwealth countries such Botswana, Cameroon, Fiji and Uganda to help develop their national cybersecurity strategies, and the challenges and outcomes of this ongoing work are being presented at the London event.

Key issues addressed at the conference include:

The first day of the conference, which has registered participants from over 25 countries, featured cybersecurity approaches by countries such as Canada and the UK whose current four-year cybersecurity strategy ends in March 2016.

Speaking about cyberterrorism, Sir Malcolm Rifkind, former UK Foreign Secretary and former Chairman, Intelligence and Security Committee of the UK Parliament said that “Cybersecurity is the challenge of our time. We are conscious of threats to our lives and to our well-being from international terrorism. These same terrorists are very vulnerable and if we ensure that our law enforcement and intelligence agencies are encouraged to give priority to dealing with cyberattacks from the evil people in our midst, then the very technology terrorists use, we can use against them and ultimately defeat them.“

“The CTO’s work in the area of cybersecurity is important not only in providing direction, but also in knowledge sharing and practical advice.” commented Reginald Bourne, Chief Telecommunications Officer, Barbados.

“I don’t foresee any let up in the cyberthreat surface, and so the CTO’s Cybersecurity Conference is crucial. It is able both to raise awareness of the threats to cyberspace, and how to tackle them, but also to enable delegates to take this awareness home and influence policy, technical architecture and capacity building.” said Les Anderson, Vice-President of Cyber, BT Security

Speaking on the importance of this year’s conference, Nigel Hickson, ICANN’s Vice-President for UN and IGO Engagement said that “ICANN is delighted and honoured to work with the CTO on this important annual event in the internet governance and cybersecurity agenda. It was an excellent opportunity to discuss important developments, not least the recent historic agreements reached on the transfer of key technical internet governance functions from the US to the global internet community.“

“At Huawei we believe that collaboration is crucial to securing networks and devices in this increasingly connected world. And organisations need to build cybersecurity in from the start, rather than bolting it on as an afterthought. CTO does a great job of bringing together both the public and private sectors across a great number of countries, creating thought-provoking debates and discussions on the cybersecurity challenges the industry is currently facing.” said David Francis, Huawei’s European Chief Cybersecurity Officer.

“Interacting with people from different horizons makes us realise how global cybersecurity threats are and how important trust is in converging our effort to combat cybercrime”, said HonourableVipuakuje Muharukua, Member of the Namibian Parliament.