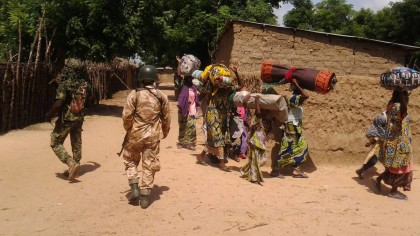 Consistent with our promise to keep the public duly informed of the progress in Operation LAFIYA DOLE, I wish to address you today, to give an update of operations since our last formal meeting. You are quite aware of the change of Command in the Theatre since 17 Mar 16. My inability to address you since assuming Command is largely due to the operations we have been conducting to which the outcome would be made public in this briefing. The Nigerian troops of Operation LAFIYA DOLE in a bid to bring the insurgency in the North East to an end have recorded successes. Some of the major successes are:

a. Capture of KUMSHE. On 23 Feb 16 at about 0740 hrs, Own troops in conjunction with Cameroonian forces commenced advance to clear and capture KUMSHE. Twenty Boko Haram Terrorists (BHT) were killed while equipment captured include one gun truck mounted with Anti-Aircraft gun, 2 AK 47 rifles as well as 60 mm mortar. Three Cameroonian soldiers sustained injuries while trying to deactivate Improvised Explosive Devices (IED) buried along the way. It is worthy to note that the joint force encountered about 10 IEDs during the operation. KUMSHE was eventually captured with little resistance from the BHTs on 24 Feb 16.

b. Capture of KALA- BALGE. On 23 Mar 16 troops of 22 Brigade in conjunction with elements of Armed Forces Special Forces (AFSF) Battalion and Army Headquarters Strike Group (AHQ SG) advanced to clear, capture and hold Kala-Balge LGA and the general areas of the Local Government. In the process, pockets of insurgents in Wumbi, Tunish and Tilem villages were cleared. The BHT training camp at Tilem was destroyed. The terrorists suffered heavy causalities including the destruction of 2 of their Toyota pick-up vehicles and 4 Canter trucks. Troops recovered 4 AK 47 rifles and a Mortar tube. Our gallant troops killed 15 insurgents, recovered other weapons and equipment and freed 567 civilians held hostage. The pictures of troops in KALA BALGE LGA are as shown on the screen. Troops are currently conducting clearing operations in the general area to destroy remnants of the terrorists still operating in KALA- BALGE.

c. Offensive to Capture ALAGARNO. On 18 Mar 16 at about 0900 hrs troops of 3 and 7 Division commenced advance to capture ALAGARNO with a preparatory air bombardment by NAF. Advance was halted severally due to planted IEDs along the routes leading to ALAGARNO. During the operations, troops cleared YAJIWA, JOBA, MOSA, ARIWUZUMARI, MISSENE SANSAN and KAGALMARI villages. Our gallant troops finally entered ALAGARNO on 28 Mar 16 during which several BHTs were killed along the route. This operation demystified the BHT spiritual power base in ALAGARNO. Throughout the operation, the NAF monitored the operation, consistently resupplied the advancing troops as well as assisted in evacuating soldiers that were wounded in action.

2. You will recall that motorcycles were inducted into the operation and launched by the Chief of Army Staff Lt Gen TY Buratai on 27 Feb 16 at DAMBOA. The Motor Cycle Battalion has been very useful in areas of road piquetting and for patrols among other tasks. Let me also state that troops in the Theatre have also been conducting clearing operations on a daily basis in the Theatre of Operation to destroy remnants of the terrorists still harbouring in some Local Government Areas as well as rescue civilians held in captivity. Clearing operations that troops of Operation LAFIYA DOLE have conducted includes:

a. Troops of 81 Task Force Battalion cleared and destroyed Boko Haram Terrorists (BHT) camps at KOMALA, DOLE, KUMASI and MAUDORI villages around the fringes of ALARGANO. Some insurgents were killed while 2 were arrested. In addition, 2 BHT Toyota pick-up vehicles, 40 motorcycles and fuel dumps were destroyed.

b. In another development, troops of 25 Brigade cleared BHT camps at Galmasku Muli, Chiralia, Maisani Talala, Ajigin Shetimalau 1 and 2 and Dalomi. During the operation 250 hostages were rescued, 5 BHT trucks, 80 motorcycles and many bicycles were destroyed. Additionally, several IED-making materials were recovered and destroyed.

d. Troops of 157 TF Bn in 8 TF Div Area of Responsibility conducted ambush along BHT crossing points between Mile 90 and Yoyo. In the process 3 motorcycles and several gallons of PMS were recovered. Additionally, troops of Brigade Quick Response (QRG) Force of Headquarters 7 Brigade MNJTF sprung a deliberate ambush 10km east of Kekenoa on some BHT riding motorcycles. Two insurgents were killed while 2 AK 47 rifles, 2 magazines, 3 motorcycles, one hand grenade, and some food items were recovered.

f. Troops of 27 TF Bde conducted fighting patrol to suspected BHTs hideout close to GAMSARI village in YUSUFANARI LGA in Yobe State. Troops successfully cleared the terrorists from their hideout. Among the items recovered was one Armoured Personnel Carrier captured from our troops in 2015. Other items are one Isreali assault rifle, extra magazine, 70 rounds of 5.56mm (NATO) and one Motor Cycle.

3. The Theatre Command wishes to reassure the public of its untiring resolve to safeguard lives and properties of Nigerians in the North East. Regarding the online video clip purportedly released by the BHT leader or his replica showing remorse and making a dying testimony, let me unequivocally state that it does not have any influence on Operation LAFIYA DOLE as our gallant troops are determined to completely wipe out all terrorists in our great country Nigeria. It is imperative to add that we shall not rest on our oars in implementing the directives of our courageous leaders, C-in-C, CDS, the COAS Lt Gen TY Buratai, and other Service Chiefs at ensuring that the BHTs are completely defeated and their remnants cleared wherever they hibernate. However, we are mindful that most of the BHT are tired of their ignoble adventure. We are ready to receive them whenever they so decide. Consequently, all would be terrorists, suicide bombers and other BHTs are advised to do away with their senseless venture and surrender to the security forces. For those ready to surrender, they are hereby assured that they would be humanely treated in line with international best practices and in accordance with the International Humanitarian Law.

4. Let me once again commend the invaluable support and contributions of all stake holders in this fight against insurgency in the North East. I wish to assure you that the Nigerian Military is more than ever determined to secure our great country. To the members of the public, I urge you to remain vigilant and report any suspicious movement of persons and objects to the military or to the nearest security agency. Before I end this brief, I will like to place on record, the commendable cooperation and contribution of the Cameroonian Forces. Their active involvement even at the expense of the lives and well-being of their troops is worthy of emulation by our other neighbours. I wish to also use this opportunity to commiserate with the Cameroonians for the loss of their gallant officer and soldiers who paid the supreme sacrifice during the joint operations. We equally remember the death of Maj Gen YM Abubakar in the line of duty. May the gentle souls of all troops from Nigeria and Cameroon who lost their lives rest in peace.