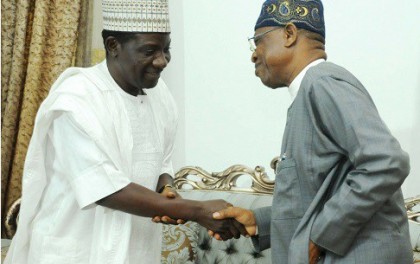 Segun Adeyemi, Jos: The Plateau State Government is to subsidize the cost of Set-Top Boxes for its citizens as the Digital Switch Over (DSO) in broadcasting spreads from the state capital, Jos, to the entire state.

Governor Simon Lalong announced the subsidy plan in Jos on Tuesday while responding to a request to that effect by the Minister of Information and Culture, Alhaji Lai Mohammed, who paid him a courtesy visit along with members of the Inter-Ministerial Task Force on DSO.

He said the state is prepared to take full advantage of the DSO for the benefit of the citizenry.

“On our part, we are taking this seriously and we have advised the Commissioner for Information to also start processing for the advantage of the citizenry here on the Plateau because even if they cannot afford (to acquire the boxes), we are preparing to subsidize for them,’’ the Governor said.

He described the pilot launch of the DSO in Jos as a welcome development, coming at a time when peace has been restored in the state.

Earlier, the Minister thanked the state government for its support for the DSO programme and expressed satisfaction with the progress so far recorded since the launch of the pilot phase on 30 April 2016.

“After one month, we have decided to come back and see how far and how well and I am happy to report to Your Excellency that we are very satisfied with the progress that has been made so far,” he said.

Alhaji Mohammed said the stakeholders would continue to improve on the distribution and activation of the Set-Top Boxes, while also working to correct any lapses that may occur.

He urged the state government to take full advantage of the DSO by assisting the citizens to acquire the boxes, without which they cannot enjoy the benefits of the DSO.

“Given also the net benefit that the state will derive from this process, because part of the advantages of the Digital Switch Over is interaction and the government can put on the platforms information and enlightenment programmes on its policies and programmes, we think it will also be in the interest of government to assist citizens to acquire these Set-Top Boxes which will further help in deepening democracy and will further help in bringing governance nearer to the people,” he said.

As part of pilot phase, the Federal Government has provided 200,000 Set-Top Boxes free of charge for the residents of Jos