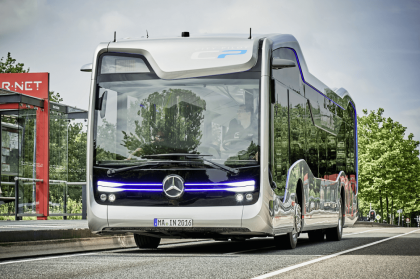 Mercedes-Benz has brought autonomous public transport another step closer. The global automaker unveiled its self-driving Future Bus in Amsterdam yesterday, 18th July, 2016, sending it on a 12-mile route between Schipol airport and the nearby town of Haarlem.

The vehicle’s CityPilot program is adapted from Daimler’s Highway Pilot system that aids truck drivers with long-haul highway journeys. Future Bus uses GPS, long- and short-range radars, and 12 cameras to identify pedestrians, obstacles, and bus stops. It can navigate busy city traffic, go through tunnels, and brake when something moves into its path.

The bus is able to drive up to 43 mph in specially marked lanes, and although a driver is present to take control should a situation arise where it’s necessary, they do not need to accelerate, brake or steer during journeys.

One aspect of the Future Bus that really sets it apart is the way it connects to a city’s infrastructure. This lets it communicate with traffic lights, allowing the vehicle to know when they turn green or red without having to rely on its own cameras and AI.

That’s not to say that the cameras aren’t incredibly advanced; they’re able to read the road surface so the bus can identify potholes and avoid them on its next run. It can also use this scanning tech to pull up inches from a curb at bus stops. 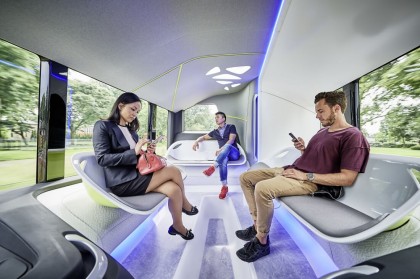 The technology inside the Future Bus is just as advanced as that which controls it. The electronic ticket system, wireless charging points, designer seating, large displays, and an interior inspired by city squares and parks make it a huge upgrade over most public buses – though it doesn’t seem able to hold very many passengers.

Rather than put Future Bus into production in its current form, Mercedes intends to move parts of the self-driving system into its city buses. But as the company says, the vehicle is “a milestone on the way to the autonomous city bus.”