Annular Solar Eclipse To Be Visible In Nigeria Tomorrow – NSRDA 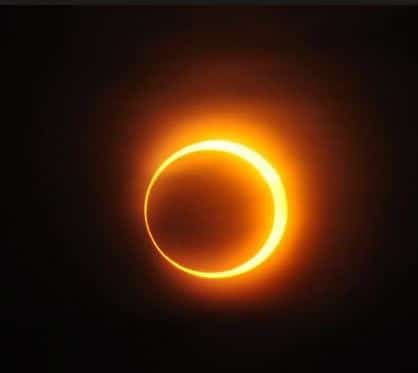 An annular solar eclipse is expected to be visible in Nigeria tomorrow, 1 September 2016.

This was announced by the National Space Research and Development Agency (NSRDA), it said Nigerians will witness a solar eclipse between 7:15 am and 10:03 am on Thursday, September 1, 2016, though with slight variations in actual timing across the country.

The agency made this known in a press statement issued by the Head of Media and Corporate Communications of NSRDA, Dr Felix Ale in Abuja.

The agency said it has arranged viewing centres to enable members of the public, pupils and students, view the eclipse with specially designed viewing instruments and also warned that the eclipse cannot be viewed with the naked eyes as this could harm or damage the human eyes permanently.

“Lagos will experience its first contact with the eclipse at 7:15 am with a maximum eclipse at 8:32 am and ending at about 10:00am. We advise the public not to panic or attach anyspiritual connotation to the eclipse, as it is a natural occurrence which had been predicted by science.

The eclipse will also be visible from Madagascar and locations in Central Africa.

The Moon’s shadow will also cross parts of the Atlantic and Indian Oceans.

For most viewers in Africa, the eclipse will be a partial solar eclipse.

It is advised that viewing glasses should be used to protect the eyes while trying to view the eclipse.