Samsung Electronics Co. Ltd., already reeling from a global recall of its Note 7 smartphones, said on Friday it would recall about 2.8 million top-load washing machines in the United States following reports of injury. 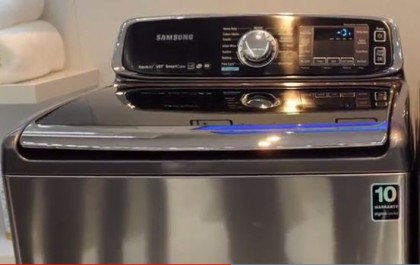 The company said 34 models of top-loading machines made between March 2011 and November 2016 may be faulty.

Nine people have reported washing machine-related injuries and there have been 733 complaints of excessive vibration or detaching doors.

The South Korean company sought the return of 2.5 million smartphones after customers complained the Note 7 model caught fire. In September, it reported a sharp fall in operating profit following the fiasco.

Samsung claimed to have fixed the problem, however, people continued to report exploding handsets, forcing the company scrap the Note 7 altogether.

Announcing the recall of the washing machines, Samsung said : “This voluntary action was driven by reports highlighting the risk that the drums in these washers may lose balance, triggering excessive vibrations, resulting in the top separating from the washer.

“This can occur when a high-speed spin cycle is used for bedding, water-resistant or bulky items and presents an injury risk to consumers.”

But some customers, who are suing Samsung, allege that their machines “explode during normal us

John Herrington, senior vice president and general manager of home appliances, Samsung Electronics America, said: “Our priority is to reduce any safety risks in the home and to provide our customers with easy and simple choices in response to the recall.

“We are moving quickly and in partnership with the US Consumer Product Safety Commission to ensure consumers know the options available to them and that any disruption in the home is minimised.”