In line with the current vision of the Nigerian Defence Academy to keep pace with the changing dynamics of Information Communication Technology, 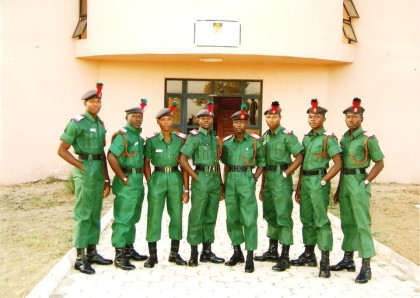 science and engineering in the fast changing world, the Commandant of the Nigerian Defence Academy, Major General MT Ibrahim, recently took a giant step in this direction by appraising possible areas of collaborating with the Defence Space Agency (DSA).

He did so when the Chief of Defence Space Agency (CDSA), Air Vice Marshal TV Udoh, visited Nigerian Defence Academy to assess the possible areas of collaboration and Partnership between the two institutions. AVM Udoh, who apprised the Commandant of the activities of the Defence Space Agency, informed him that the agency was established in the wake of insurgency and insecurity in the country which presented a need to occupy and control the Space area for national defense and security purposes, and also to address diverse social-economic problems. He added that, although the establishment of the National Space Research Development Agency (NASRDA) in 2001 makes provision for a military Space Command, the Agency was only set up in October 2014 due to the gaps encountered in the fight against insurgency in the north – eastern part of the country.

He indicated that the current Military High Command has shown great interest and commitment in the establishment and growth of the DSA by according it the necessary support. Consequently, AVM TV Udoh pointed out that the DSA has been able to carry out research in collaboration with NASRDA in the field of rocketry, which had resulted in DSA launching a rocket with a range of 5 kilometres. Currently, he revealed, work is ongoing to increase the range to 20 kilometres. He also listed some institutions like the Air Force Institute of Technology (AFIT), Nassarawa State University, Federal University of Technology, Minna, among others, that DSA was collaborating with. He therefore called for collaboration in the area of research and enlightenment with the Nigerian Defence Academy. He looked forward to a platform where the Agency will conduct lectures, seminars and joint research with cadets and officers of the Academy on the advantageous use of Space in modern warfare, noting that modern warfare will involve Space and Cyber.

He expressed optimism that partnering and collaborative research with NDA will enable officers and cadets an avenue to key into the knowledge of cyber and space war and all the advantages it offers.

Responding, the Commandant Major General MT Ibrahim pointed out that with the mandate of the NDA to move to higher height, and in keeping pace with the dynamics of the digital and global world, the partnership with DSA was indeed a welcome idea, stating that it will avail the cadets an opportunity to have a broad outlook about things and think big in the future. He indicated interest in engaging third year cadets at this stage in order to stimulate their minds, adding that during Leadership Lecture Series cadets should also be informed about the vital role Space plays in security and warfare.

Major General Mohammed Tasi’u Ibrahim further stated that with the ongoing partnership between the Academy and other institution in the engineering field and with the support from TETFUND and PTDF and other institutions, NDA is blessed with a robust engineering faculty and is favorably placed to carry out certain tasks for DSA if given the opportunity. He suggested that NDA could be tasked to produce some components for DSA, giving assurances that the Academy can comfortably meet any such requests.

Speaking at the occasion, the Academy Provost, Professor AS Nwankwo, expressed excitement about the prospect of the DSA lecturing cadets, stating that it is indeed a welcome idea that will benefit the cadets and stimulate interest. He averred that NDA already has the platform for joint research with the Defence Space Agency. He further disclosed that NDA has state – of – the – art equipment to produce whatever components or items required of it.