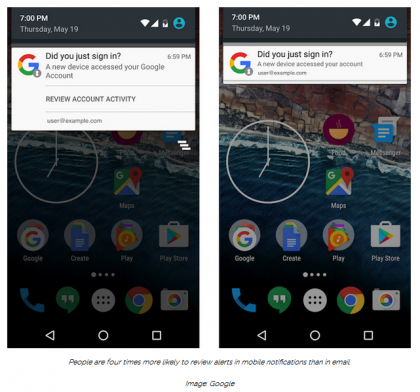 This is contained in a statement from the organisation which was obtained by the News Agency of Nigeria (NAN) in Lagos.

The statement said that henceforth, Android users should expect a notification on their Smartphones while receiving an email alert when a new device has been used to log into Google’s account.

It said that the native notification would ask whether the users have just tried to sign in.

The statement added that from there, the users could tap the notification to review account activity and take action to secure their accounts, if necessary.

“The purpose of login email alerts were to offer accounts owners a real-time view of access to an account, allowing for a faster reaction in the event of a hijacking attempt.

“People are four times more likely to review alerts in mobile notifications than in email,’’ it said.

The statement said that email, however, was not the optimal medium for security-events, notifications and often lands in already cluttered inboxes.

It, however, said that users are four times more likely to review mobile system notifications than email notifications.

The statement noted that notifications would appear when a new device was used to login to an account, as well as when there was a security event linked to an account.

It said that if users choose to review their account activity, they can see the device model that was used to access the account, when the account was accessed, what browser was used, and the device’s IP address.

The statement said that Google had not said whether it would bring the new device login alert notifications to iOS.

It announced that it had recently enabled the new prompt notification for two-step verification on both iOS and Android.

“Instead of a one-time code delivered via SMS, the notification simply requests that users tap yes or no when asked if they attempted to log into a particular account.

“Notifications are considered to be less vulnerable to tampering than messages sent on public mobile networks.

“To receive the prompts on iOS, the Google Search app must be installed, while the prompts are delivered on Android through Google Play Services,’’ the statement added. (NAN)