…. a smart billboard that would use microphones, cameras and other sensors to bring personalized advertising to outdoor displays.

Web  giant, Yahoo is set to revolutionize outdoor advertising with a new smart  billboard that can spy on anyone in other to serve them with targeted ads to its audience. 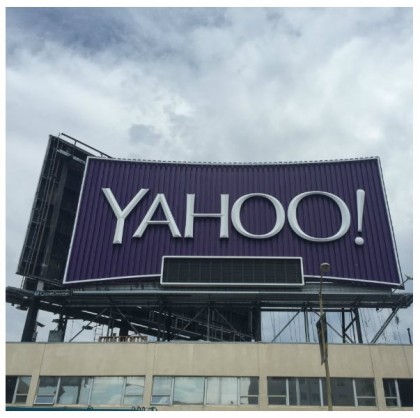 One of the biggest goals of advertising is to successfully connect to an audience and make them purchase the endorsed product or service. Not everyone, however, can easily be lured in. Personalized advertising tries to solve this, where ad companies try to learn what a specific customer wants by knowing their information and movements.

With this in consideration, web portal Yahoo, still fresh from the hack reveal two weeks ago, has filed for a new patent for a new billboard containing sensors which can watch, listen, and capture bio-metric data from people to target them with personalized advertisements.

According to the patent, which was published this Thursday, the billboards would be equipped with cameras, microphones, motion-proximity sensors, as well as biometric sensors like fingerprint or retinal scanning. These gadgets would then be used to track the engagement of the audience to the advertisement. Yahoo explains further:

“For example, image data or motion-proximity sensor data may be processed to determine whether any members of the audience paused or slowed down near the advertising content, from which it may be inferred that the pause or slowing was in response to the advertising content (eg, a measurement of ‘dwell time’).”

Aside from this data, the smart billboard can also capture audio information. This will then be processed using speech recognition technology to gather keywords relating to the ad that are spoken by the people that approach the billboard.

Yahoo, through the patent application, argues that the personalization of ads on the smartphone has made mobile the most efficient place to do advertising, compared to public digital displays, which use old technology.

To be able to cater to many people at one time, Yahoo aims to ‘grouplize’ advertisements. Instead of individually targeting people, the ad content would be based on real-time information of a crowd of people who may be on the freeway, or the train. For example, a smart billboard would be placed on the part of a freeway where traffic sensors are located, to be able to detect how many cars are passing, and how fast they are going.

The sensors could also capture images of vehicles on the road, and identify their maker and model, to be able to come up with demographic data which could be used for a new advertisement.

Furthermore, the billboard could use cell-tower data, mobile app location data, or image data to “identify specific individuals in the target audience, the demographic data which can then be aggregated to represent all or a portion of the target audience.”

“Those of skill in the art will appreciate from the diversity of these examples the great variety of ways in which an aggregate audience profile may be determined or generated using real-time information representing the context of the electronic public advertising display and/or additional information from a wide variety of sources.”

Lastly, the company notes that the ad system’s potential to become integrated with current ad exchanges, reaching other audiences across devices with similar advertisements used on the smart billboard.