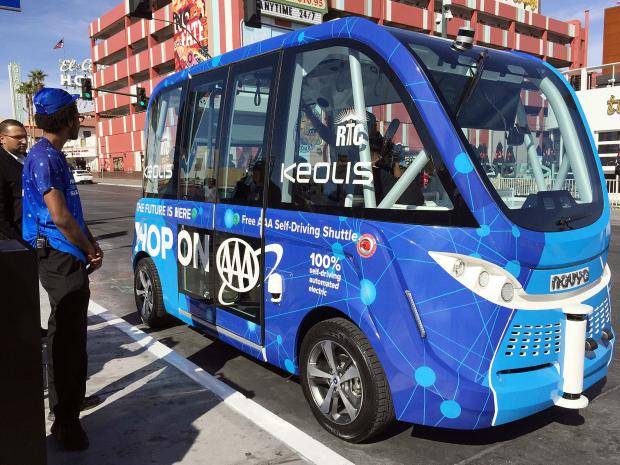 It took less than two hours for Las Vegas’s brand new self-driving shuttle to end up in a crash on Wednesday – thanks to a human.

The autonomous bus made its debut on public roads around the so called Innovation District in downtown Las Vegas in front of cameras and celebrities, dubbed America’s first self-driving shuttle pilot project geared toward the public. But within two hours it had already been involved in a minor crash with a lorry. No injuries were reported.

“The shuttle didn’t have the ability to move back. The shuttle just stayed still.”

theguardian report that Las Vegas police officer Aden Ocampo-Gomez said the truck’s driver was at fault for the crash and was cited for illegal backing.

“The shuttle did what it was supposed to do, in that its sensors registered the truck and the shuttle stopped to avoid the accident,” the city said in a statement. “Unfortunately the delivery truck did not stop and grazed the front fender of the shuttle. Had the truck had the same sensing equipment that the shuttle has, the accident would have been avoided.”

The oval-shaped shuttle can seat up to eight people and has an attendant and computer monitor, but no steering wheel or brake pedals. Developed by French company Navya, it uses GPS, electronic kerb sensors and other technology to find its way at no more than 15mph.

Before it crashed, dozens of people had lined up to get a free trip on a 0.6-mile loop around Fremont East, Las Vegas, including Nascar driver Danica Patrick and magic duo Penn and Teller. City spokesman Jace Radke said the shuttle took two more loops after the crash.

The year-long pilot project, sponsored by AAA Northern California, Nevada and Utah, is expected to carry 250,000 people. The AAA said human error was responsible for more than 90% of the 30,000 deaths on US roads in 2016, and that robotic cars could help reduce the number of incidents.

Google sibling Waymo announced on Tuesday that it is launching a fully autonomous Uber-like ride-hailing service with no human driver behind the wheel in Phoenix, Arizona in the next few months, making it the first such service accessible to the public without no one to take control in an emergency.