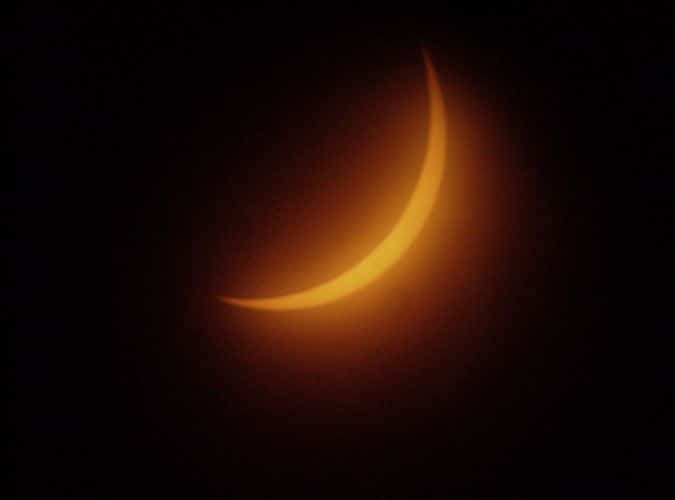 The National Space Research and Development Agency says, a partial solar eclipse will be visible in different degrees of totality on Sunday the twenty-sixth of February.

A statement by the Agency’s Head of Media, Dr. Felix Ale says there is no cause for alarm as Solar Eclipse which is a natural occurrence will be observed across the nation making each part of the country a great site for viewing the eclipse in different degree of obscurity.

A solar eclipse is a type of eclipse that occurs when the Moon passes between the Sun and Earth, and the Moon fully or partially blocks (“occults”) the Sun.

This can happen only at new moon when the Sun and the Moon are in conjunction as seen from Earth in an alignment referred to as syzygy.

In a total eclipse, the disk of the Sun is fully obscured by the Moon. In partial and annular eclipses, only part of the Sun is obscured.

If the Moon were in a perfectly circular orbit, a little closer to the Earth, and in the same orbital plane, there would be total solar eclipses every month.

However, the Moon’s orbit is inclined (tilted) at more than 5 degrees to the Earth’s orbit around the Sun (see ecliptic), so its shadow at new moon usually misses Earth.

Earth’s orbit is called the ecliptic plane as the Moon’s orbit must cross this plane in order for an eclipse (both solar as well as lunar) to occur. In addition, the Moon’s actual orbit is elliptical, often taking it far enough away from Earth that its apparent size is not large enough to block the Sun totally.

The orbital planes cross each other at a line of nodes resulting in at least two, and up to five, solar eclipses occurring each year; no more than two of which can be total eclipses.

However, total solar eclipses are rare at any particular location because totality exists only along a narrow path on the Earth’s surface traced by the Moon’s shadow or umbra.