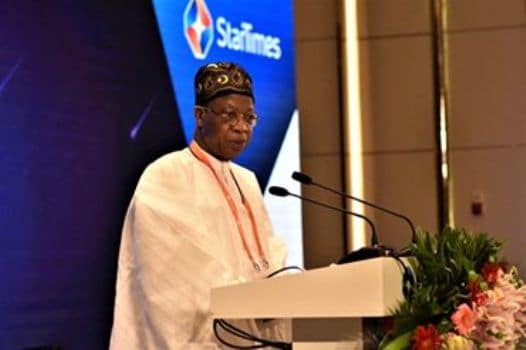 The Minister of Information and Culture, Alhaji Lai Mohammed, has made a strong pitch for Nigeria to embrace the growing Animation technology in order to benefit from what has become a $300-billion industry and which represents 25% of the global audiovisual market.

Addressing the opening ceremony of the 7th African Digital TV Development Seminar in Beijing, China, on Monday, the Minister said a developed animation industry in Nigeria will be a boost to the country’s already-established entertainment industry and make the country an outsourcing destination for global animation services.

”American animation has developed as America’s sixth largest pillar industry; in Japan, the animation industry has outperformed automobile, iron & steel industries to be the third largest industry; and South Korea has undertaken nearly one third of the global animation production business. Most of the segments in the animation industry are growing at the rate of 10% Year over Year, and some segments are growing at 15% Year on Year.

Alhaji Mohammed said Nigeria, and indeed Africa, must move to grab a share of the pie by tapping into the animation boom, adding that Nigeria, in particular, has all the ingredients for a successful animation industry.

”(Nigeria) has a ready domestic audience and market. Nigeria has about 86.2 million people online, and that’s 46.1% of the population, ranking it number one in Africa and number seven in the world. It has 44 million TV viewing homes in the country. Nigeria is expected to switch over to digital broadcasting when all 44 million homes have to invest in purchasing Set-Top Boxes.

”In addition, Nigeria’s telecommunication industry has grown to $25 billion, and active lines are said to be well over 113 million, in comparison with 450,000 people and $500 million investment portfolio in year 2000, again ranking it no. 1 in Africa and 11th in the world.

NEWER POSTFG To Provide An Enabling Environment For The Private Sector
OLDER POSTRecession: CBN Hosts ‘Tweet-Meet’ To Engage Stakeholders on The Economy