FG To Roll Out DSO In Six States In One Month 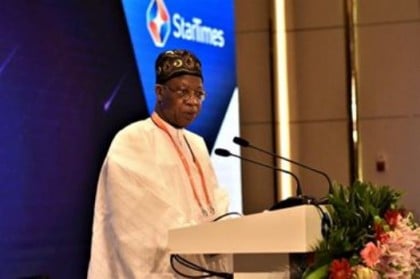 The Federal Government has said that it will switch over from analogue to digital broadcasting (DSO) in six States across the six Geo-Political zones within the next one month.

The Minister of Information and Culture, Alhaji Lai Mohammed said this on Monday in Abuja when he received the Niger Minister of Communication, Koubra Abdoulaye.

The News Agency of Nigeria (NAN) reports that Abdoulaye was in Abuja to understudy Nigeria’s progress in DSO and solicit the assistance of the country in her country’s process of digitisation.

Mohammed who recalled that Nigeria had so far successfully rolled out DSO in Jos and Abuja, reiterated government’s commitment to making the project a success.

“By the end of June and first week of July, we will be rolling out DSO in six different states in the six geo-political zones of Nigeria.

“We will continue the roll out until the whole country is digitised.

“Rest assured that this government has the political will to make the DSO a success story to the benefit of all Nigerians and to the ECOWAS Community in the areas of the application of the Digital Dividends.
“However, we will take our time to do it right,” he said.

The minister identified Set-Top Boxes (STBs), and Contents as challenges facing the DSO.

The International Telecommunication Union (ITU) had given all West African States the deadline of July 17 for total switch over from analogue to digital broadcasting.

Mohammed explained: “a major challenge to the DSO is the availability and cost of STBs.
“Even when you achieve a Nationwide Signal Coverage, you cannot shut down the Analogue Transmitters until all the TV Homes have access to
STBs.

“So far, the government has had to subsidise STB acquisition in the Roll-Out but this is not sustainable for the larger population of the
country.

“So, we are currently exploring avenues to make the retail cost of STBs affordable to the general public without compromising the ECOWAS Minimum Standard.

“Subsidy in one form or the other will then be extended to those below the poverty line,” he said.

On the challenge of content of broadcast, the minister said digitisation would open window for many more channels of programming but there would not be enough local contents to feed the public.

“The easiest way to colonise the minds of our people is via the Mass Media.

“If we do not seriously address the issue of Compelling Indigenous Content, we
will be exposing our population to further colonisation,” he said.

Mohammed noted that the visit of his counterpart from Niger was important because it showed the need for ECOWAS Member Countries to work together and share experiences to ensure a successful DSO.

He assured the Niger minister of Federal Government’s assistance to the digitisation process in her country.

The minister also on behalf of President Muhammadu Buhari thanked the government and people of Niger for their cooperation in fighting the Boko Haram insurgency.

Earlier, Abdoulaye said her country was impressed with the successes recorded so far by Nigeria in the digitisation process.

She said Nigeria was leading in the DSO process among other West African countries and Niger would like to tap from the experiences.

NAN reports that Mohammed led the visiting minister and her entourage on tour of major DSO facilities in the FCT. (NAN)