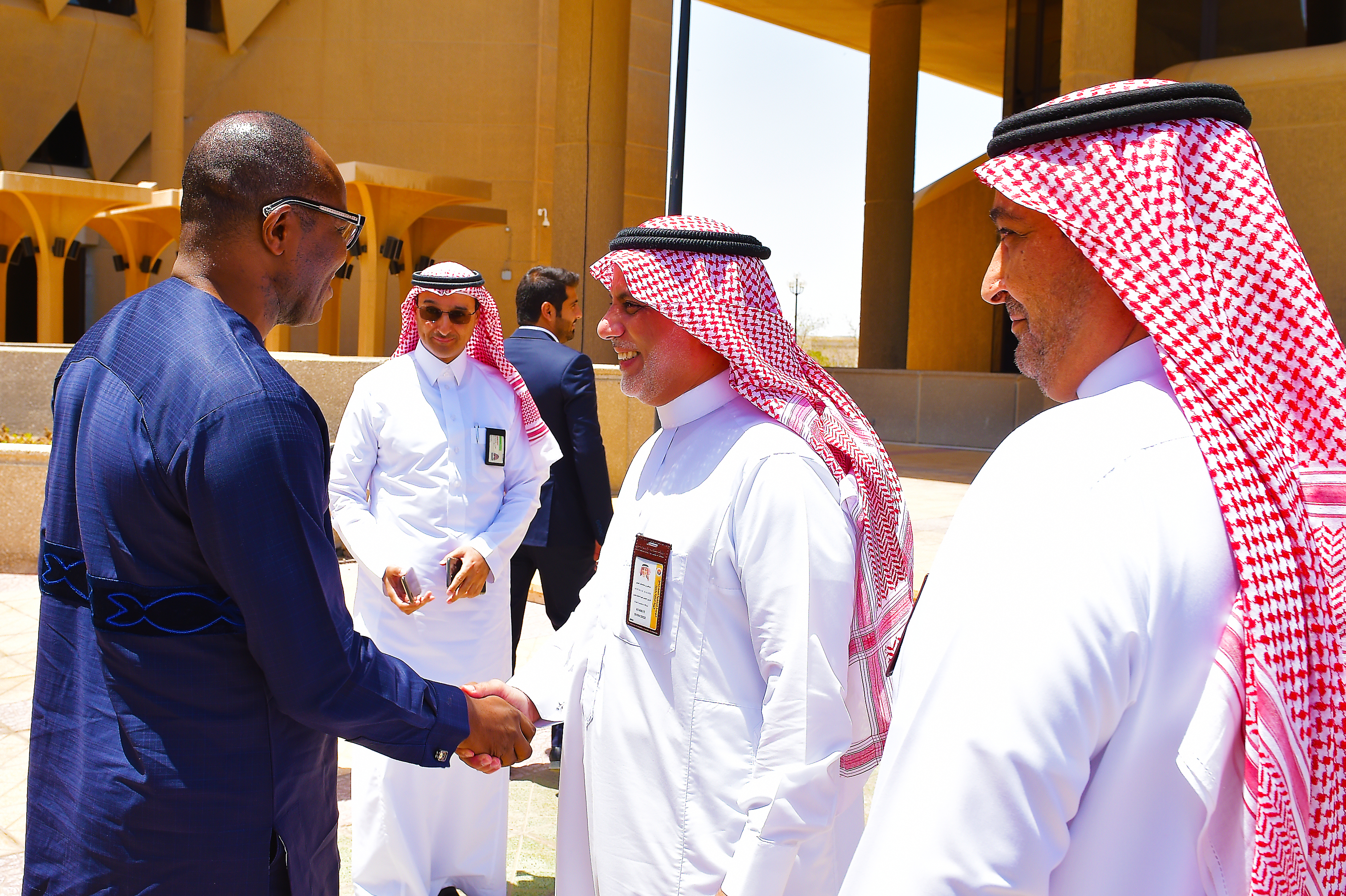 The Minister of Energy, Industry and Mineral Resources of the Kingdom of Saudi Arabia, H.E. Khalid bin Abdulaziz Al-Falih has expressed the strong readiness of his country to sign a Memorandum of Understanding (MoU) with Nigeria. The Saudi Energy Minister communicated the blessings of the King of Saudi Arabia, Salman bin Abdulaziz Al Saud and the Crown Prince, H.R.H. Mohammed bin Salman bin Abdulaziz Al Saud for the partnership investment while announcing their readiness to sign the MoU with the Nigerian President, Muhammadu Buhari. The early draft of the MoU that will solidify the new oil and gas development partnership between Nigeria and Saudi Africa will be ready in the first week of May, 2019.

The Saudi Minister made this known during a high level bilateral meeting with Nigeria’s Minister of State for Petroleum Resources, Dr. Emmanuel Ibe Kachikwu on Wednesday 24th April, 2019 in Riyadh. He stated that his team will undertake the task of drafting an outline of the MOU in consonance with Nigeria and consequently move through the bureaucratic channels of getting the requisite approvals and endorsements. The Organisation of Oil Exporting Countries (OPEC) Governors for the two countries, Eng. Adeeb Y. Al-Aama (Saudi Arabia) and Dr. Omar Farouk Ibrahim (Nigeria) have already been nominated to fast track the process for official endorsements and signing.

The agreement will in principle opens the doors for Nigeria to potentially benefit from Saudi Arabia’s and effectively, Saudi Aramco’s recent aggressive oil sector investments across the globe. Areas of interest will cover existing refinery revamp, building of a brand new refinery, LNG investments and product supply trading in crude and refined products. H.E Khalid Al Falih also reiterated the possibility of establishing an independent refinery in Nigeria as the country considers Nigeria as the best hub to reach other African countries.

Nigeria and Saudi Arabia has over the decades enjoyed a robust bilateral relationship with the Nigerian delegation to the holy land pilgrimage among the highest globally amidst the common heritage of being abundantly blessed with oil and gas deposits. Nigeria’s Dr. Kachikwu has expressed his expectation that the definite signing of the MoU will further cement the cordial relationship between both Nations. He stated that the visit to Saudi Arabia became necessary due to the common grounds between the two countries and the success of the country in the oil and gas sector. Dr. Kachikwu disclosed that Nigeria aims to leverage on the huge success of the Saudi Government in the sector while namechecking Saudi Aramco’s turnover of over $200 Billion in the last year. He further applauded the cooperation between Nigeria and Saudi Arabia at the highest global level of OPEC while expressing his excitement that the two lead persons for the MoU drafting are seasoned OPEC Governors with the highest levels of competence.

Dr. Kachikwu who led a high powered delegation drawn from the Ministry of Petroleum Resources, Nigerian National Petroleum Corporation (NNPC), Department of Petroleum Resources, Petroleum Products Pricing Regulatory Agency and Petroleum Equalization Fund for an exploratory visit to the Oil rich Nation at the invitation of his Saudi counterpart, H.E. Khalid Al Falih, visited the Saudi Aramco Headquarters in Dhahran where his delegation was met by the President and Chief Executive Officer of Saudi Aramco, Amin H. Nasser and the top management of the conglomerate. The visit was aimed at crystallizing the ongoing discussions on collaborating with the Federal Government of Nigeria on investments in the oil and gas sector. It also provided an opportunity for a close observation of Saudi Aramco’s Command Center, the Oil Supply, Planning and Scheduling Centre and the Geosteering Operations Center in the Exploration and Petroleum Engineering Center (EXPEC).

Dr. Kachikwu also visited the Jubail Industrial City where the President of the Royal Commission for Jubail and Yanbu (RCJY), Eng. Abdullah bin Ibrahim Al-Saadan and his strategic team took the Minister on a tour of the gigantic project complex. Dr. Kachikwu had expressed his anticipation for a replication of the innovative project in the ongoing Oil and Gas Industrial Park in Nigeria as announced by the Nigerian Content Development and Monitoring Board (NCDMB).

Dr. Kachikwu further visited the Saudi Basic Industries Corporation (SABIC) and was received by the Chief Executive Officer and Vice Chairman, Yousef A. Al-Benyan who was represented by the Executive Vice President of Petrochemicals, Abdulrahman S. Al-Fageeh. The visit presented an opportunity for the Chief Operating Officer, Refineries and Petrochemicals of NNPC, Mr. Anibor Kragha and the Senior Technical Adviser to Nigeria’s Petroleum Minister on Refineries and Downstream Infrastructure, Mr. Rabiu Suleiman to deep dive into issues of shared interest with SABIC.

At the National Industrial Development and Logistics Program (NIDLP) Centre, considered to be the most ambitious, innovative and most impactful program under Saudi’s Vision 2030, Dr. Kachikwu was intimated that the core objective of the Program is to position Saudi Arabia to become Global leaders in the areas of Mining, Energy, Logistics and Industry. The NIDLP incubated 100 Light House project amongst other high value Saudization schemes keenly reflected the bold ambitions of the #Project100 ideated by Dr. Kachikwu and incubated by the NCDMB was highlighted as a shared interest for both Nations. This further formed the foundation for the NCDMB boss, Engr. Wabote Simbi to firm up plans for a proposed technical working visit to the NIDLP Centre.

Dr. Kachikwu also visited the King Abdullah Petroleum Studies and Research Center (KAPSARC) were he was received by the President, Adam Sieminski who was represented by the Vice President, Finance and Operations, Dr. Mansoor Al-Mansoor and hosted to a networking lunch amidst high powered conversations steeped on the utility of research, innovation and development. The delegation subsequently went on a guided tour of Saudi Aramco’s Riyadh Refinery at the instance of the Minister of Energy, Industry and Mineral Resources of the Kingdom of Saudi Arabia, H.E. Khalid bin Abdulaziz Al-Falih.

The high powered visit had its fair share of offering the Nigerian Delegation an experience of the famed Saudi hospitality and warmth as they were hosted to separate dinner events by both the Energy Minister of Saudi Arabia and the Minister of Finance of Saudi, H.E. Mohammed Al-Jadaan while the Nigerian Ambassador to Saudi Arabia, H.E. Isa Muhammad Dodo ensured that his highest assurances to follow up on all agreements where communicated.