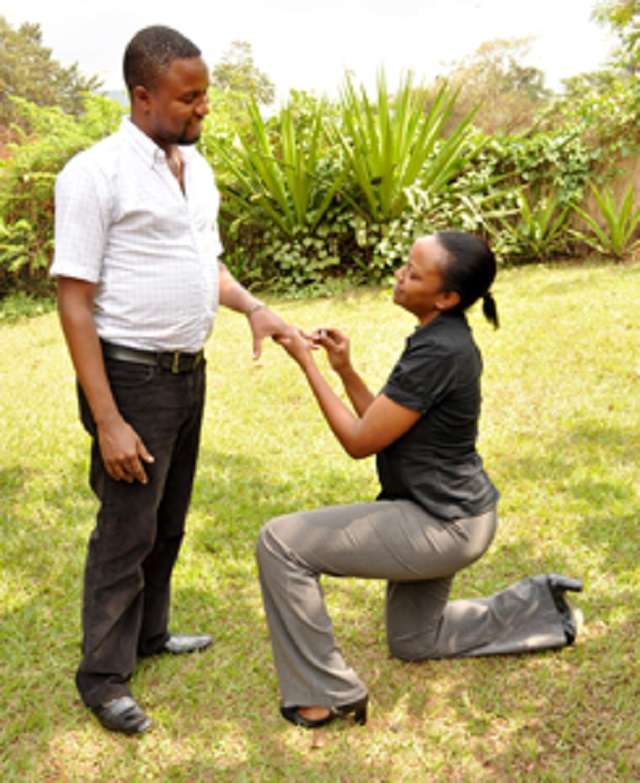 Some Nigerians in the Federal Capital Territory (FCT) have reacted to the strange drift of women making marriage or relationship proposals to their male counterparts.

They expressed mixed views over the trend in separate with the News Agency of Nigeria (NAN) on Friday in Abuja.

They noted that although the development was alien to Nigeria’s culture, it was becoming trendy in recent times due to the increasing influence of western lifestyle, modernization and pressure to get married.

According to some Nigerians, women who make marriage proposals to men should be applauded for their confidence, rather than ridiculed, condemned or labeled “desperate’’.

However, others said they were against the trend, adding that such proposals have been and should remain the sole responsibility of the man.

Mr. Abdul Sarki of Garki 2 said: “Some men of marriageable age delay proposing to ladies they love due to indecisiveness, poor financial status, and other economic realities.

“Thank God for modernization, women are not restricted to seek what they want, and even asking men to marry them when they feel they are suitable ”.

“The society should stop judging or condemning women that propose marriages to men, but rather applaud and encourage them for taking the bold step,’’ he urged.

Mrs. Julie Fadason, a resident in Asokoro said she proposed to her husband due to age factor and the need to start bearing children before menopause.

“I had to take the bull by the horn when I felt no marriage proposal was forthcoming despite being in a relationship for over five years with my husband.

” We were both not getting younger and we needed to act fast since we both wanted children,” she said.

According to her, they have been married for over 10 years now, and she has no regrets for taking the initiative to propose to him.

Similarly, Mrs. Jummy Okewole, a mother of two, said she was advised to propose to her husband four years ago by some friends and close relatives.

” As at the time we were dating, he had no stable job, but had prospects and was responsible that was why I heeded to advise from people close to me and proposed to him.

“Now, God has blessed him with a very good job, that he has even asked me to resign from my work and opened a business for me.”

Okewole, therefore stressed that financial status should not be used as a yardstick for a Marriage proposal, rather love and loyalty should be considered.

Mrs. Jummai Adamu said she was under a lot of pressure from her family and close friends that was why she proposed to her husband.

” Even though we have talked about settling down in the future, but my family and some friends contributed in making me to propose to my husband.

“Two of my younger sisters were already planning for their wedding, and they wanted me as the eldest to settle down before them.

“That was why I asked him to marry me or else I will settle down with another suitor, ”she said.

However, Miss Joy Obaseki, a spinster living in Karu said she could not make a marriage proposal to a suitor despite its growing trend in modern societies.

“I can not, because he might not respect me in future, especially when we have misunderstandings.

Similarly, Mr Anthony Adams a resident of Jabi said as a man it was his responsibility to propose to a woman and not the other way round.

“I feel that makes me less of a man because I am the one to take care of her and our children, so I will propose when I am ready.

“Since she is not paying the dowry, why would she make the marriage proposal?’’ he said. (NAN)

The News Agency of Nigeria (NAN) recalls that some female have recently taken the bull by the horn by proposing to their partners, like Judge Judy, a American TV courtroom personality.

Another example is Alecia Moore, popularly known as Pink, an American singer who proposed to her husband Carey Hart in June 2005.