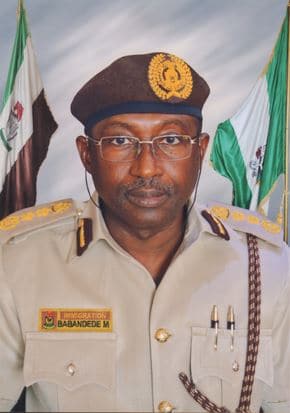 The Nigeria Immigration Service is taking steps to reconsider the dispersed 2000 officers and men who were unilaterally and illegally recruited into the service in 2015.

This step the Comptroller-General of the Service, Mohammed Babandede MFR, says will be for the affected shortlisted persons to now be re-screened and to pass through all clearance systems in order to be admitted formally into the service.

The Comptroller-General of the Service, Muhammad Babandede MFR, said this in a statement signed by Ekpedeme King, the NIS spokesperson.

Babandede said the Federal Government had approved the review of the lingering case and the re-screening of those affected.

He said the Civil Defence, Fire, Immigration, and Prisons Services Board (CDFIPB) had on Aug. 11 approved some guidelines for the screening of the applicants.

“The Nigeria Immigration Service (NIS) wishes to inform the 2000 applicants for employment into the Service who were irregularly issued letters of employment in February 2015 that the Federal Government has approved the review of the case.

“Following an emergency meeting of the Civil Defence, Fire, Immigration, and Prisons Services Board (CDFIPB) on Aug.11, 2016, guidelines were issued for the screening of the applicants,’’ he said.

The Immigration spokesperson said that part of the guidelines were security clearance, drug test, certificate verification and Implementation of CDFIPB policy on “Age on Rank,” he said.

The NIS boss said that applicants whose names were listed on the NIS website (www.immigration.gov.ng) should report to the NIS Headquarters, Abuja, with their credentials and two passport photographs.

He said the screening would be conducted in batches based on rank and state of origin from Aug. 29 to Sept. 4 in Abuja.

He, however, stressed that the exercise was not a call for fresh recruitment and, therefore, urged the general public not to forward any application for recruitment into the NIS.

The 2000 dismissed recruits had been protesting at the National Assembly and the Ministry of Interior since 2015 for their reinstatement.

They were employed by a Presidential Committee set up by Former President Goodluck Jonathan in 2015 following the tragedy that marred the March 2014 recruitment exercise where many candidates died and others sustained injuries.