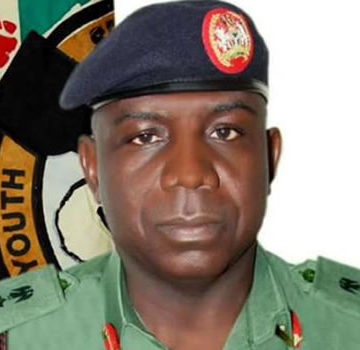 Kazaure expressed his feeling on Saturday when he inspected the camp as part of his tour to ascertain the well-being of the 2018 Batch “A’’ corps members posted to the state.

The NYSC boss said that he was not impressed with the facilities in the camp, describing them as ‘old and highly dilapidated’.

“The camp needs total overhaul and we are appealing to the state government to look into the condition of its facilities.

“It is the responsibility of state governments to maintain NYSC orientation camp in their states for the benefit of corps members,” he said.

Kazuare noted that corps members could not be posted to Ishiellu Local Government Area of the state affected by a fratricidal communal clash between 2008 and 2011.

“We are still waiting for information from security agencies and critical stakeholders in the council to tell us that the area is safe before we post members there.

“The Department of State Security (DSS), Police and Army will give us information of the safety of the areas before we post corps members to the council,” he said.

“It might interest you to know that we have started posting corps members to Maiduguri, Borno because of improvement in security, we will post corps members only to safe areas.

“Corps members should also take precautionary security measures such as walking in groups and shun excessive and unnecessary travels,” he said.

The NYSC director-general commended the corps members for the favourable report from the NYSC state Director, Mrs Regina Iluebbey, and advised them to shun crime and other negative tendencies.

“I was a corps member 30 years ago and with hard work, commitment and patriotism, you will become future NYSC DG, governors, and legislators, among others.

“You should seriously embrace the Skills Acquisition and Entrepreneurship Development (SAED) programme because it is clear to all that white-collar jobs are hard to come by in the country,” he said.

The NYSC State Director commended Kazaure for the visit, noting that it had motivated and inspired the corps members in camp to ensure proper conduct to serve the nation,” she said..

She told the director-general that 2,201 corps members were deployed to the state under the Batch A, consisting of 1,116 males and 1,085 females.

“80 pregnant females left the camp or were relocated to their homes within Ebonyi while one corps member trained abroad was decamped for being over aged.

“The dilapidated facilities at the camp poses serious threat to us, including the existence of the school for the deaf within the camp.”

The News Agency of Nigeria (NAN) reports that Kazaure presented cash to deserving groups of corps members and inspected facilities at the camp among other engagements. (NAN)