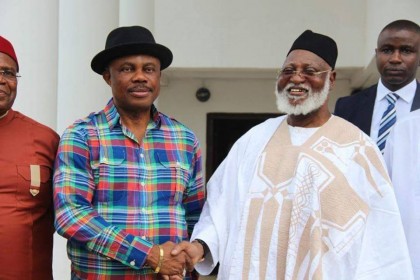 The former Head of State General Abdulsalami Abubakar was in Anambra state for a social assignment and decided to pay a courtesy visit to the state governor, He expressed satisfaction with the progress he has seen on ground and charged the people of the state to always support the Governor to encourage him to do more. He also congratulated the Governor for the level of security in the state.

The Governor was full of joy for the visit and thanked the Army General for his contribution to the development of the country. Th governor described the former head of state as a great man noting the legacy he is living for the people of this great country Nigeria.

General Abdulsalami and his entourage escorted by some other Anambra state officials left Awka for Nnewi for their social function.