Nigeria Police Again Warns Politicians Against The Use Of Thugs 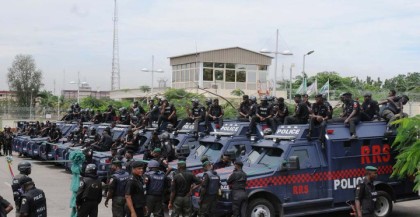 Following an intelligence report of a likely invasion of the House of Representatives by hoodlums and thugs, the Nigeria Police Force promptly deployed its personnel to the premises to prevent a breakdown of law and order.

Consequently, the Police condoned the area and began screening of all members and visitors alike.

In the course of this lawful exercise, Alh. Aminu Tambuwal CFR, arrived the venue with a motley crowd, who broke the cordon, assaulted the Police and evaded due process and the Police had the duty to restore order and normalcy, using lawful means.

The IGP seizes this medium to warn all political actors and their followers to respect constituted authority and due process and to desist from the use of thugs to pursue their agenda.

The Nigeria Police shall continually apply all lawful means to prevent a breakdown of law and order in all segments of the society and shall apply the full weight of the law on any political actor who violates the peace and security of the nation.