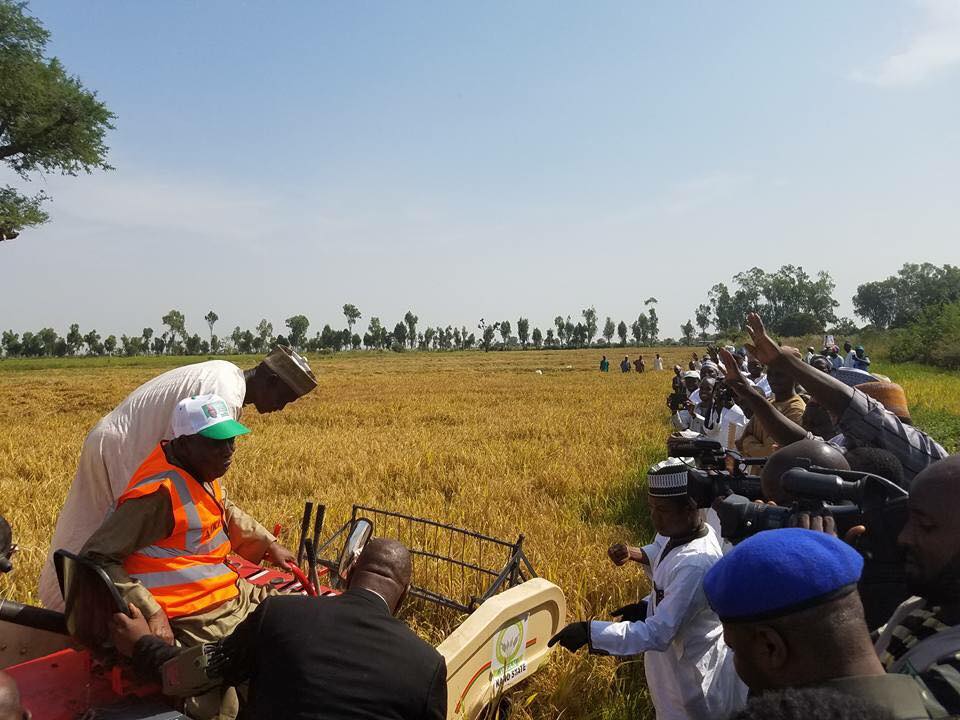 Governor Ganduje said he decided to personally flag off the harvest programme because of the commitment of his administration in agriculture as urged by President Muhammadu Buhari in order to diversify the nation’s economy. Due to the efforts of Governor Ganduje in rice farming alone, the said crop farmers in the state will harvest 1.2 million tons of rice this year which has exceeded the state’s need of about 700 thousand tons.

It is also expected that by next year’s farming season Kano State will produce over 2million tons which are 50% of Nigeria’s rice need of about 4 million tons.

Over 10 thousand farmers who grow the crop benefitted from the Kano State and CBN Anchor-Borrower programme which gave out revolving interest-free loans to farmers in the state as well as thousands of more others who benefitted from Ganduje’s intervention in farming since the beginning of his administration.

Elsewhere in the state, the Executive Governor of Kano State His Excellency Dr. Abdullahi Umar Ganduje OFR inspects the ongoing construction of a state of the art skills acquisition Center at Dangoro along Zaria Road. The center if completed will offer training of 24 different skills as a tool for youth empowerment in the state. Governor Ganduje stated that before work commenced at the center extensive research took place to fish out areas where the youth in the state are lacking the necessary skills for and as such, the center will fill the vacuum when completed. Vice President Professor Yemi Osinbajo lay the foundation stone for the project and since then work has not stopped, with the contractor promising to complete and deliver as scheduled.