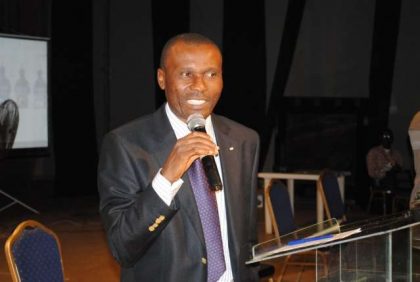 The Minister of Niger Delta Affairs, Mr Usani Uguru Usani on Monday in Abuja updated President Muhammadu Buhari on the activities of his ministry.

“For a while, he has not been round and their things he needed to know from me.

“So, I had to brief him on issues pertaining to the ministry, the projects that are going and other anthropogenic issues that have to do with the general matters concerning the Niger Delta region especially, at the throw up of some of the concerns bothering on who is right to speak for, who not right to speak for, and then the issues of the Niger Delta Development Commission.

“All these occupied our discussion with the President today.’’

On the recent threat by Niger Delta Avengers to resume attacks on oil installations, the minister stated that the issue was not discussed during his meeting with the president.

He, however, maintained that the Federal Government would continue to dialogue with all aggrieved groups in the Niger Delta region with a view to ensuring peace and stability in the country.

“Well, we haven’t discussed the Avengers per se. But, the President has always shown indication that whatever we need to and can do to sustain peace in the region, we would continue to do it.

“And of course, the benefit of that, you are aware that the Vice President has been chairing the committee that handles the issues they are raising.

“And so, while that goes on operationally, the President just needs to be briefed on our efforts though we know that the Vice President is briefing him from time to time but per se, the Avengers issues was not discussed.

“On a general note, it is understood that we have to be engaged to be able to sustain the peace that prevailed for a while,’’ he added.

The minister described the slow pace of work on the East West road project as unfortunate.

He said: “But we all have to appreciate one thing. Such physical infrastructure don’t decay over night and so the neglect has continually put continues liability on us.

“Yes, it’s true that I met with the contractors, appealed to them to go back to site, we have also been very conscientious in releasing funds.’’ (NAN)