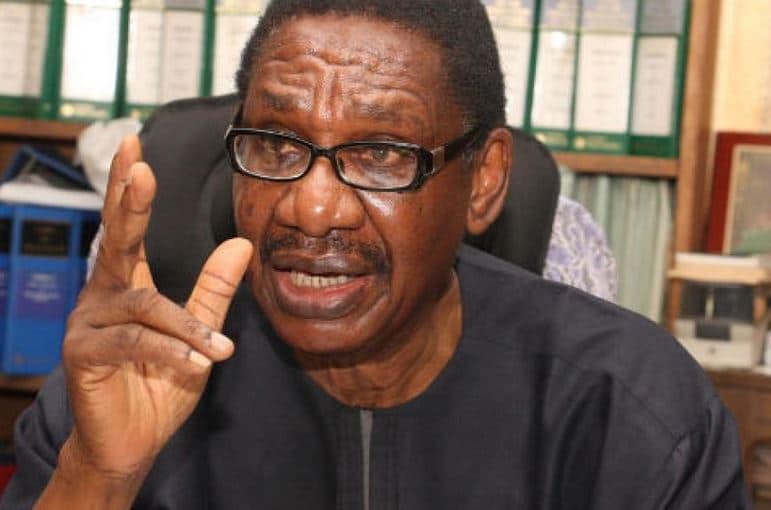 Why States Should Be Left To Determine Their Minimum Wage – Sagay

The Chairman, Presidential Advisory Committee Against Corruption (PAC),Prof. Itse Sagay, on Friday said states, and not the Federal Government, should determine the minimum wage payable to their workers.

Sagay stated this  in his paper at the 20th Wole Soyinka Annual Public Lecture in Benin.

Speaking on the  theme,  ‘‘Nigerian State in the Aftermath of the Centenary: Prospects for its Indivisibility,’’  Sagay  opposed  the Nigerian Labour Congress (NLC) position that the issue of minimum wage should remain on the exclusive list.

“For the NLC, the Federal Government should continue to determine for  states what minimum wage they should pay to their employees.

“And yet, it is a basic and fundamental aspect of federalism  that no federating unit  should dictate to or interfere in  areas of governance of others.

“A state, no matter how meagre its resources, has to accept the dictates of the federal government on this critical issue of its own internal governance.

“This trade union opposition to federalism is the most shocking of  all those resisting the re-introduction of true federalism in accordance with our pre-independence concord.

“The fathers of Nigerian trade unionism were great nationalists and progressives.

‘The latter day successors are ready to sacrifice the interest of this country for their own narrow and short-term selfish interests.

“Chief Michael Imoudu would disown this anti-federalism position  if he were still alive,” he said

“This has created the present stagnant, crisis-ridden and dysfunctional geographical entity called modern Nigeria,’’ he said.

He said the present constitution had  made the Federal Government to become the “centre  of a titanic and destructive struggle for control.”

Sagay said under such an arrangement, states’ indolence and parasitic tendencies had followed, resulting in an unproductive and under-developed country.

“In our present condition of tight unitarism, any act of mis-governance in Abuja reverberates throughout the country.

“In a real federation, Federal Government’s colds begin and end in that government.

“The current unitary system is suffocating and preventing the states from enjoying individual autonomy and development. There is stifling uniformity, without unity.

“States are stunted in growth and are perpetually dependent on the Federal Government’s feeding bottle. This has to stop if Nigeria is to ever develop.

“In order words, it is imperative that we return to the 1963 Constitution  modified to suit our present circumstance, if we are to co-exist in a stable, crisis free and fast developing Nigeria.

” Nigeria is a country of many nations which had existed independently long before the arrival of the all-conquering colonial power,” he  further stated.