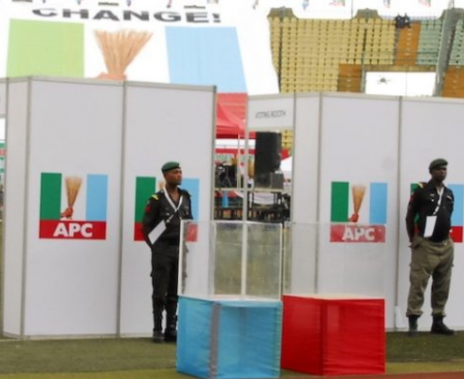 With barely 24 hours  to  the Presidential and National Assembly elections, the  All Progressives Congress (APC), in Sokoto state has  received  no fewer than 100,000 defectors from the Peoples Democratic Party (PDP), and the Social Democratic Party (SDP).

Malam Bashir Mani,  Special Assistant on Media and Publicity to the APC  leader in Sokoto state,  Sen. Aliyu Wamakko, said that  the new entrants into the APC were received  by Wamakko on Wednesday, during the party’s campaign in  Sokoto North and Sokoto South Local Governments.

Over 88,000 of the defectors were hitherto the executives and members of the Social Democratic Party (SDP  drawn from the 23 LGAs of the state .

Others were the executives and members of the Peoples Democratic Party (PDP ), from eight out of the eleven wards in Goronyo local government. Some were the members of the Traders Association at Kasuwar Kanawa, Sokoto South Local Government, while the rest were from Kofar Atiku, in Sokoto metropolis, among others .

Sen. Wamakko welcomed the defectors into the fold of the APC and  lauded them for their timely decision.

Senator Wamakko again reiterated the resolve of the APC to focus on issues-based campaigns, and not campaign of calumny , deception and lies.

“The recent gubernatorial debate conducted in Sokoto has vindicated us that , our gubernatorial candidate, Alhaji Ahmed Aliyu is a vibrant youth, who is highly qualified to effectively and efficiently govern the state, to more greatness .

“The debate has also exposed his main rival as a candidate who lacks the desired focus and direction, devoid of any meaningful programmes and policies .

” Let me again stress that, if elected , our gubernatorial candidate and his running mate would scrap the wasteful and deceitful education levy, while refunds would be fully made to the workers,” the lawmaker said.

Wamakko further appealed to the electorate in the State, to massively vote President Muhammadu Buhari and the candidates of the APC at all levels.

Aliyu, the governorship candidate and his running mate, Alhaji Faruk Yabo promised to consolidate on the tangible achievements of Wamakko when he was the Governor of the state, between 2007 and 2015.

The duo described the APC as the party to beat , just as they vowed to accord priority to revamping agriculture, education , health , women and youths empowerment , as well as rejuvenating the local and state civil services, among others .

The Chairman of the State Campaign Council, Alhaji Maigari Dingyadi and director-general Alhaji Yusuf Suleiman  declared PDP dead and buried in the state .

The State Chairman of the party , Alhaji Isa Achida, expressed optimism that the party’s candidates, at all levels, would be massively voted for during the polls. (NAN)