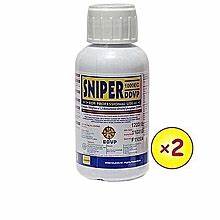 Mr Shitu Kabir, the National President, Cowpea and Beans Farmers, Processors and Marketers Association of Nigeria, has called for an outright ban of Sniper pesticide due to the danger it poses to human lives.

Kabiru, who made the call in an interview with the News Agency of Nigeria (NAN) in Abuja, was reacting to the Federal Government’s directive for stricter measures to curtail the use of sniper.

National Agency for Food and Drug Administration and Control’s Veterinary Medicine and Allied Products Directorate, recently announced stricter measures in the use of sniper in homes to end its abuse.

While commending the Federal Government for taking such bold step, Kabiru said outright ban of the chemical would ensure more lasting solution to the problems it posed, particularly to human health.

According to him, besides suicide, the chemical has been associated with killer beans and other negative developments.

He called for its outright ban to safeguard Nigerians from the negative effect of its use.

Kabiru said that there were safer chemicals that could be used in its place that would not endanger the lives of Nigerians.

“We congratulate ourselves and thank Mr President and NAFDAC for taking this bold step.

“We in the agro sector welcome the development because it will be more advantageous to us.

“However, I am calling for its outright ban because once it is available even in bigger containers; it can still be accessed and abused.

“Its disadvantages are enormous. Whatever advantages it has, for the simple reason that it is linked with death, it should be banned.

“It is this same sniper that has been attributed to killer beans in the market and now suicide. So, you cannot talk of its advantages after all there are alternatives to it.

’’We are in a modern world where farmers can use other chemicals that are less dangerous. In fact, the best of all is to go organic, which is healthier than the use of chemicals.

“There are organic chemicals that farmers can resort to for better yield and overall health of consumers.

“So, why do we have to bother ourselves with chemicals that will shorten our lives and deplete our hard earned income, which runs into billions of naira annually on medical tourism.

“We can eat organic foods and remain healthy for the best part. So, let us all go organic.’’

Kabiru said that the association would be in the fore front in the canvassing for the ban of the product.

It is an insecticide commonly used in some homes in Nigeria to ward off mosquitoes, cockroaches and other household insects.

“There are growing concerns that the pesticide, which experts say is dangerous to respiratory organs, is also used to preserve food items like beans.’’

Given its abuse, there have been debates as to whether or not it should be curtailed or out rightly banned. (NAN)