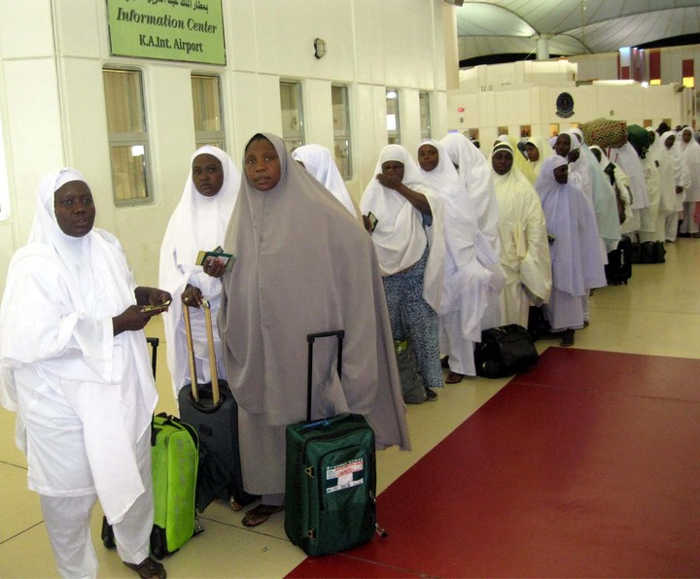 The First batch of 529 intending pilgrims from Kano State were on Friday transported to Saudi Arabia for the 2019 Hajj.
The News Agency of Nigeria (NAN) reports that the pilgrims departed the Malam Aminu Kano International Airport around 6:00 am aboard a Max Airline Boeing 747 aircraft.
Alhaji Muhammad Abba-Danbatta, the Executive Secretary of the Kano State Pilgrims Welfare Board, disclosed this to News Agency of Nigeria (NAN) in Kano on Friday.
He said the pilgrims were from 12 local government areas of the state comprising of Doguwa, Bichi, Bebeji, Bagwai, Bunkure and Gabasawa.
Others are Garunmalam, Karaye, Kumbotso, Shanono, Rano and Nasarawa local government areas.
He said the Airline was expected to transport the second batch of the intending pilgrims on Saturday, July 13 to the Holy Land.
Abba-Danbatta said the board had already secured a befitting accommodation for the pilgrims both at Makka and Madina, and urged the pilgrims to ensure strict adherence to rules and regulations guiding the Hajj in the Holy Land.
Meanwhile, the Kano State Governor, Dr Abdullahi Ganduje has cautioned the pilgrims against acts capable of denting the image of the state and the country while at the Holy Land.
Ganduje, who was represented by his Deputy, Dr Nasiru Gawuna, gave the warning while addressing the intending pilgrims at the Hajj camp shortly before their departure to the airport for their onward transportation to the Holy Land.
He advised the pilgrims to desist from taking anything that is prohibited as the Saudi authorities would not spare anyone caught violating the laws of the country.
He said the state government had established a mobile court to try erring pilgrims at the Holy land as part of effort to ensure discipline among the pilgrims and expressed hope that they would be of good conduct. (NAN)