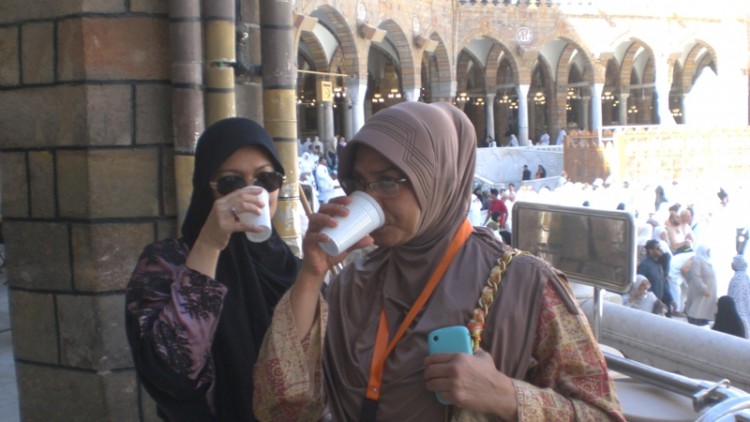 Saudi Arabia authorities, the National Hajj Commission of Nigeria (NAHCON) and concerned organisations have continued to assist Nigerian pilgrims with water following the harsh weather condition in Madinah
The News Agency of Nigeria (reports) that the assistance has been particularly in the area of provision of portable and adequate water to quench thirst of pilgrims in the face of excessive heat in the area.
Many of the pilgrims, who attended Jummat prayer at the Prophet’s mosque, were seen drinking ‘Zamzam’ water freely made available to them.
Other pilgrims made do with cold water provided by concerned individuals and organisations on their way to the mosque.
The weather condition in Madinah on Friday was 45 degree Celsius, which most pilgrims described as very harsh.
At the Jummat prayer, Saudi security personnel had hectic time controlling the tumultuous crowd of pilgrims at the one million capacity mosque.
Some, who could not secure space in the mosque, resorted to using adjourning space some metres away from the mosque.
At a point before the commencement of khutba (sermon) and the two rakat prayers, securitymen were heard echoing “Hajji,Hajji, Hajji” to pilgrims for them to maintain orderliness in the observance of the Rakat prayer.
NAN reports that the number of Nigerian pilgrims to this year Hajj increased to 21,990 and were airlifted in 45 flights, as at Friday while MaxAir VM1057 departed Yola for Jeddah with 539 from Taraba.
The Command Control Centre of NAHCON disclosed the figure in Madinah on Friday.(NAN)