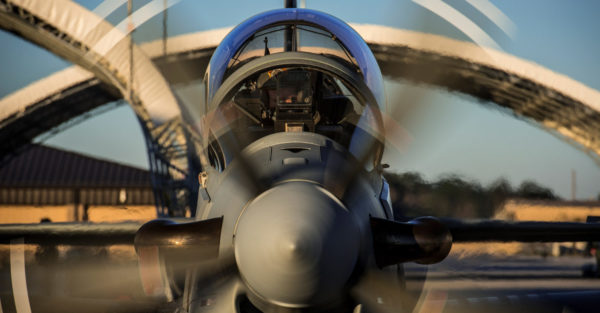 The Federal Government has reiterated its determination to continue to procure sophisticated weapons to keep the nation’s military in good fighting shape, saying the country will take delivery of Super Tucano fighter jets in 2020.

A statement by the Senior Special Assistant to the President on Media and Publicity, Malam Garba Shehu, in Abuja on Tuesday night, said the fighter jets, expected from the United States, would be deployed in checking terrorist activities in the country.

He said: “While the military arsenal is not something you pay for and get, requiring mostly long-time orders, weapons will come in accordance with the terms of contracts.

“This country is expecting the commencement of the delivery of Super Tucano fighter jets, very effective in this kind of warfare, beginning next year from the United States.’’

Shehu, who lauded the efforts of the armed forces in suppressing the activities of Boko Haram and other terrorist groups in the country, described as `fantastic’ the recently launched “Super Camps’’ by the military.

According to him, the essence of this is to act proactively and respond quickly to the changing nature of terrorism.

The presidential aide noted with delight that the Buhari administration had made the country safer than it met it in 2015.

“The position of the Nigerian government is that the Boko Haram terrorism has been degraded and defeated. The real Boko Haram we know is defeated.

“At the moment, the Nigerian government under President Muhammadu Buhari has made the country safer than it met it.

“In 2015 when he took power, Boko Haram terrorism was active in nearly half the number of states in the country.

“They controlled a territory the size of Belgium, with a flag and systems of administration and taxation of their own.

“Emirs and Chiefs had fled their domains along with hundreds of thousands of ordinary citizens. Such is no more; they have been taken from them,’’ he further observed.

Shehu added that, at present, terrorist activities had been confined to the remote, rural agrarian areas of Borno  and pockets of outrages in Adamawa and Yobe states.

He disclosed that the administration had embarked on an ambitious electronic/digital border monitoring scheme to curtail the porosity of the borders.

He revealed that the government was also working with the UN agencies, the World Bank, the Islamic Development Bank, donor agencies and friendly countries towards addressing the problems created as a result of the activities of the terrorist groups in the affected areas.

“A few weeks ago, the administration inaugurated the Northeast Development Commission, to fast track development and poverty eradication in the affected areas.

“The Buhari administration is strongly encouraged by successes recorded so far by our armed forces and the MNJTF, and is optimistic that in the same way as our military defeated the Boko Haram, so would the ISWA terrorism be defeated,’’ he added.

NAN reports the Super Tucano is a durable and flexible aircraft designed for counter-insurgency and close air support roles.

It can also be used for reconnaissance missions in low-threat environments and for pilot training, and is capable of operating from unimproved runways.

The aircraft can be equipped with advanced avionics, an electro-optical, infrared and laser targeting system, as well as communications and datalinks to enhance its combat capability. (NAN)