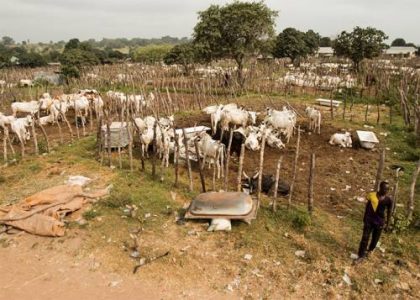 The Federal Government says it will soon commence the reconstruction of grazing reserves across the country.

Chief Audu Ogbeh, the Minister of Agriculture and Rural Development, said this in Abuja when participants of the Executive Intelligence Management Course Twelve (EIMC12) and Institute for Security Studies, Usma Dam, Bwari, visited him.

A statement by Mr Nakorji Mohammed, the Director of Information at the ministry on Friday, quoted Ogbeh as saying that the reconstruction of the grazing reserves had become necessary due to farmers-herders conflicts.

The minister said the reconstruction was also crucial for the Federal Government to reduce the high unemployment rate in the country.

“The grazing reserves will help in solving these problems.

He called on individuals who had the interest and ability to build grazing reserve to do so, adding that the government would support such individual.

Ogbeh called on members of the institute to focus toward addressing the security challenges facing the West African region and Africa in general.

The Director of the institute, Alhaji A.S. Adeleke represented by the Deputy Director Studies, Dr. A.M.Wali, said the purpose of the visit was to commend the country’s achievements in the agriculture sector.

Adeleke also applauded the ministry for its efforts toward curtailing the agro-terrorism where people are hoarding farm inputs.

He said the course participants were drawn from 21 agencies in Nigeria.

Other participants according to Adeleke were also from Benin Republic, Liberia, Niger and Sierra-Leone consisting of senior officers from the military intelligence and other Federal Government agencies.

Adeleke said that the theme of this year’s course is `Transhuman and International Migration: Challenges on Governance, Peace and Sustainable Development in sub-Sahara Africa’. (NAN)