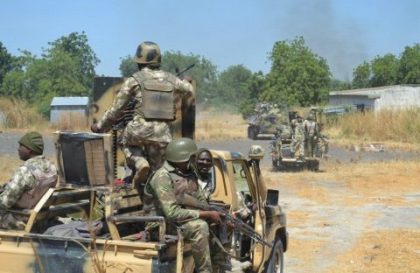 The military task force in charge of security in Plateau and Southern Kaduna has deployed more troops to Nandu-Gbok village in Sanga Local Government Area of Kaduna State.

Maj. Gen. Augustine Agundu, Commander of the operation made this known during an Medical Outreach to the area on Wednesday.

NAN reports that armed bandits suspected to be Fulani herdsmen on Monday attacked Nandu-Gbok village, killed at least 10 persons and burnt down no fewer than 30 houses in the same community.

Agundu said that troops were immediately deployed to the area when the crisis broke out.

According to Agundu, more troops have been deployed to the area to prevent a reoccurrence and to ensure that normalcy returned to the community.

The commander stated that as part of its non-kinetic strategy to promote peaceful coexistence in the area, it has organised a media outreach/feeding programme for residents of the community.

He explained that the deployment of the troops was to encourage the people in the area to remain in their community and live peaceful and normal lives.

“My doctors told me that they have so far treated 1,200 people and as you can see more people are on queue.

“As you can see it is a serene environment; it will be beneficial for all of us if the people remain rather than run away for refuge elsewhere.

“I appreciate our collaborators; the 23 medical doctors,  the 10 nurses,  the lab technicians and pharmacists,” he said.

The commander further said that the task force had been able to hold many stakeholders’ meetings to encourage the people.

He said that life was gradually returning to normal in the area with the concerted efforts made by stakeholders to restore peace.

He added that the meetings encouraged the people to eschew all forms of violence and live together as one people.

“Do not forget that the planting season is by the corner and if we don’t encourage the people to remain in the community, they might not farm this year,” he added.

Mr Charles Danladi, the Chairman of the local government area, expressed appreciation to the task force for the efforts it was to ensure peaceful coexistence among the people.

Danladi appealed to the task force to deploy more troops to vulnerable areas in the local government.

The chairman also expressed appreciation to the local government council and the state government for assisting the victims with relief materials.

In his remarks, Chief Aliyu Yanma, the Etsu Numana Gwantu, charged the residents of the area to be security conscious always.

The monarch further advised the residents to always report to elders of the village any strange person or movement in the community.

He also urged the youths to always be at alert if they did not want a reoccurrence of the unfortunate killings.

The News Agency of Nigeria (NAN) reports that cooked food, including noodles were given out to the residents, with children receiving clothing. (NAN)