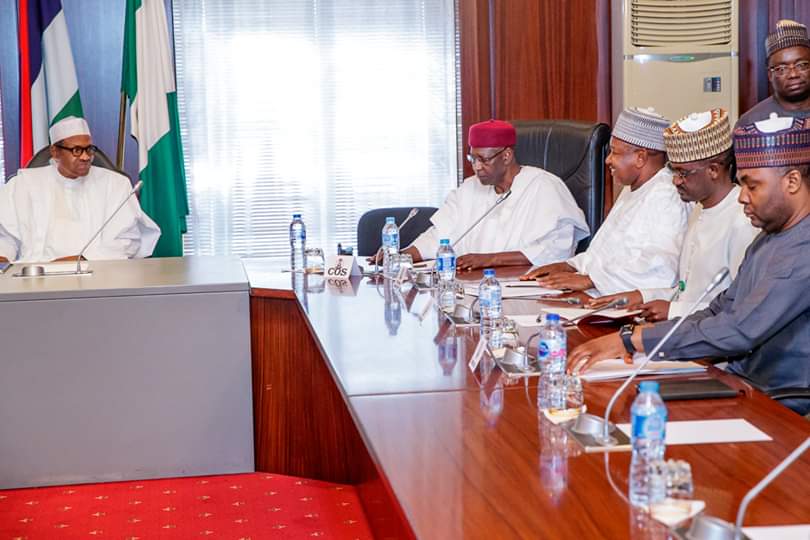 President Muhammadu Buhari on Wednesday in Abuja inaugurated members of the governing board of the North East Development Commission (NEDC).

Buhari inaugurated the board members shortly before the commencement of the meeting of the Federal Executive Council.

He told the members to commence the process of resettlement and rehabilitation of Internally Displaced Persons to their original homes or their new communities to bring social cohesion in the northeast.

According to him, the inauguration of the commission is in fulfillment of the promise he made to the people of the northeast.

Buhari said that the gesture was in appreciation of the massive electoral support he received from the zone in 2015 and 2019 that encouraged him to inaugurate the board.

He told the board to shift focus from humanitarian assistance as soon as possible in all relevant areas to developmental and infrastructural projects, including reconstruction of roads, houses, educational institutions and business premises destroyed by Boko Haram.

The president also urged the board members to work out strategies to key into the African Development Bank’s Special Agro-Industrial Processing Zones initiative.

He said that the board should also explore other programmes and initiatives, championed by Nigeria’s development partners, local and international to further bring socio-economic development to the zone.

Buhari disclosed that N10 billion had been earmarked in the 2019 budget for the smooth take-off of the commission as well as the rebuilding of the zone.

Urging the members to make judicious use of the fund, the president mandated the commission to conduct a comprehensive survey on the magnitude of damage caused by the insurgency.

The Senate had in April, confirmed the appointments of retired Maj.-Gen. Paul Tarfa and Mohammed Alkali as Chairman and Managing Director/Chief Executive of the NEDC respectively, alongside nine other members.